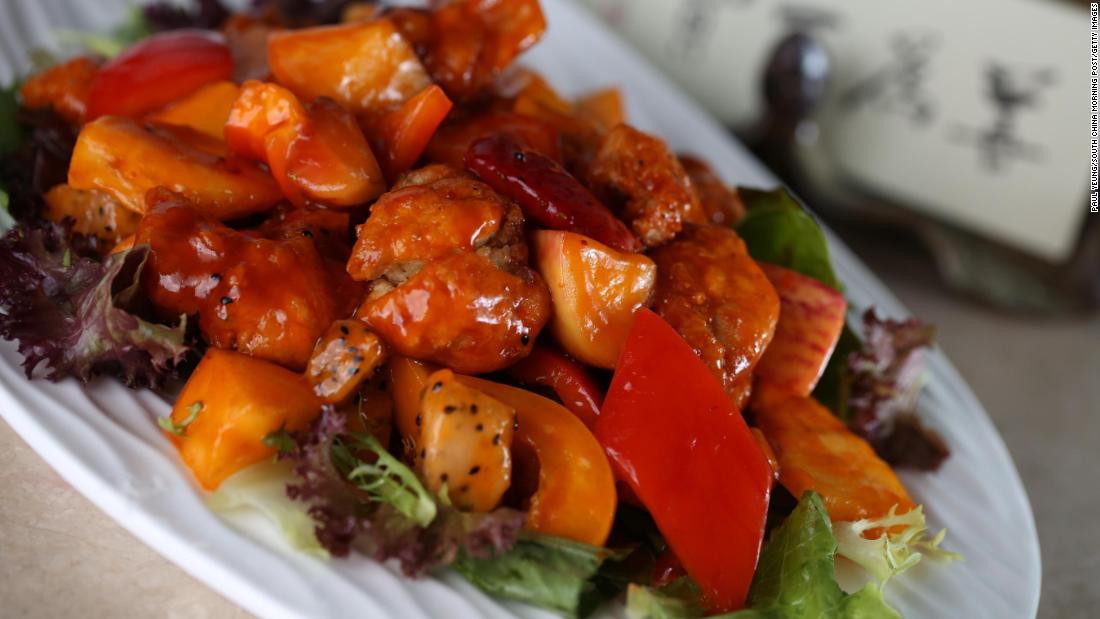 Beijing (CNN) — When 29-year-old Wang Jianguang was growing up in a poor neighborhood in China’s northern Shanxi province, his family would buy him chicken wings with soy sauce as a rare treat.

Except they weren’t actually made of chicken. The wings were an intricate combination of soybeans and peanuts. “They looked just like chicken wings, though,” Wang said.

It was his first encounter with China’s centuries-old tradition of imitation meat dishes.

In the past few years, demand for fake meat products has surged in the Western world, as people seek environmentally sustainable and healthier alternatives to red meat.

Two of the biggest US plant-based food companies, “Impossible Foods” and “Beyond Meat,” have made millions from a growing appetite for meat-free burgers. By mid-2019, there were so many orders for “Impossible Meat” the company admitted it was struggling to keep up.

But long before the first plant-based patties hit the grill in the West, China had been sculpting and flavoring traditional meat-based dishes out of mushrooms, nuts and vegetables.

“It shadows and parallels Chinese cuisine … it is incredibly diverse and in every part of the country you have a different version,” said food writer Fuschia Dunlop.

Some records of monks eating tofu-based “vegetarian meat” date back as early as the Song Dynasty in the 10th century. It was known as “fanghun cai” or literally “imitation meat dish.”

The restaurant’s owner Liu Hongyan said between 80 and 100 people regularly visit her restaurant each day and the number is rising.

“I think more and more people are embracing vegetarian culture. People are considering their health,” she said. “There’s too much fat and oil in red meat,” she said.

China’s early adoption of fake meat products is closely linked to its long history of Buddhism.

Buddhism was introduced to China as early as the Han Dynasty, around 2,000 years ago. Over the centuries, its popularity has risen and fallen in line with the preferences of the country’s leaders. Today, it’s practiced by around 20% of China’s population — some 250 million people.

A central tenet of Buddhism is respect for all living creatures, and vegetarianism is common among its followers. Dunlop said that while China’s monasteries provided a strict vegetarian diet, they would often have to accommodate for the dietary choices of visiting pilgrims or patrons.

“[The visitors] would expect [meat-based] meals and this was where the tradition came from. You’d get all the dishes you’d expect to eat at a banquet, but made from vegetarian ingredients.”

Chinese Buddhist vegetarian food became “extraordinarily sophisticated” in the centuries after the Han Dynasty, according to Dunlop.

“In the larger monasteries … people could dine on grand dishes of “shark’s fin,” “abalone” and other delicacies cunningly fashioned from vegetable ingredients,” Dunlop wrote in her book “Food of Sichuan.”

A Chinese “fish” dish made from vegetarian ingredients, including a faux fish skin.

Today, she said the widespread influence of imitation meat can be seen in the range of dishes offered. In Shanghai, you can eat stir-fried “crabmeat” made from mashed potato and carrot. In Sichuan, restaurants offer traditional “twice-cooked pork” made without a scrap of meat.

“Everyone in Shanghai eats vegetarian “roast duck” or “goose,” which is made from layers of thin tofu skin, which are flavored and then deep fried so that it has a golden skin like the real dish,” Dunlop said.

There are now more than 300 restaurants offering fake meat in Beijing alone, according to China Daily. But China is far from being a nation of vegetarians — meat consumption is still huge.

In the past 60 years, demand for pork has led to a 10-fold jump in the number of pigs slaughtered per person. As Chinese people have become richer, the demand for meat has risen at the same time.

But even that rise in meat consumption may have helped push people towards vegetarian imitations. As recently as 2014, problems with tainted meat were being discovered in the country’s largest food processing centers.

“Some people are quite worried about the source of the meat, but don’t want to lose that taste,” Dunlop explained.

In his kitchen, he carefully shapes a single, large king oyster mushroom into small cubes which will soon become vegetarian “kung pao chicken.”

Adding flour, oil, cashews and sugar, among other ingredients, the mixture is tossed into a boiling hot wok. The final piping-hot product has the signature sweet-but-savory taste, with a consistency similar to the meat it’s intended to mimic.

According to Wang, in recent years industrialization has meant much of China’s fake meat comes from factories rather than being made in kitchens. He makes all his dishes by hand.

“For example, for pork ribs, the bone is made from lotus root, while the meat is made from potato, mushrooms and peanut protein,” Wang said. He said the ribs need to sit overnight before they’re ready to be served.

While both Wang and owner Liu are aware of Western fashions in fake meat, they’re both dismissive of the trend. For them, the original Chinese version is more sophisticated.

“I feel like Westerners only eat burgers and steaks.”