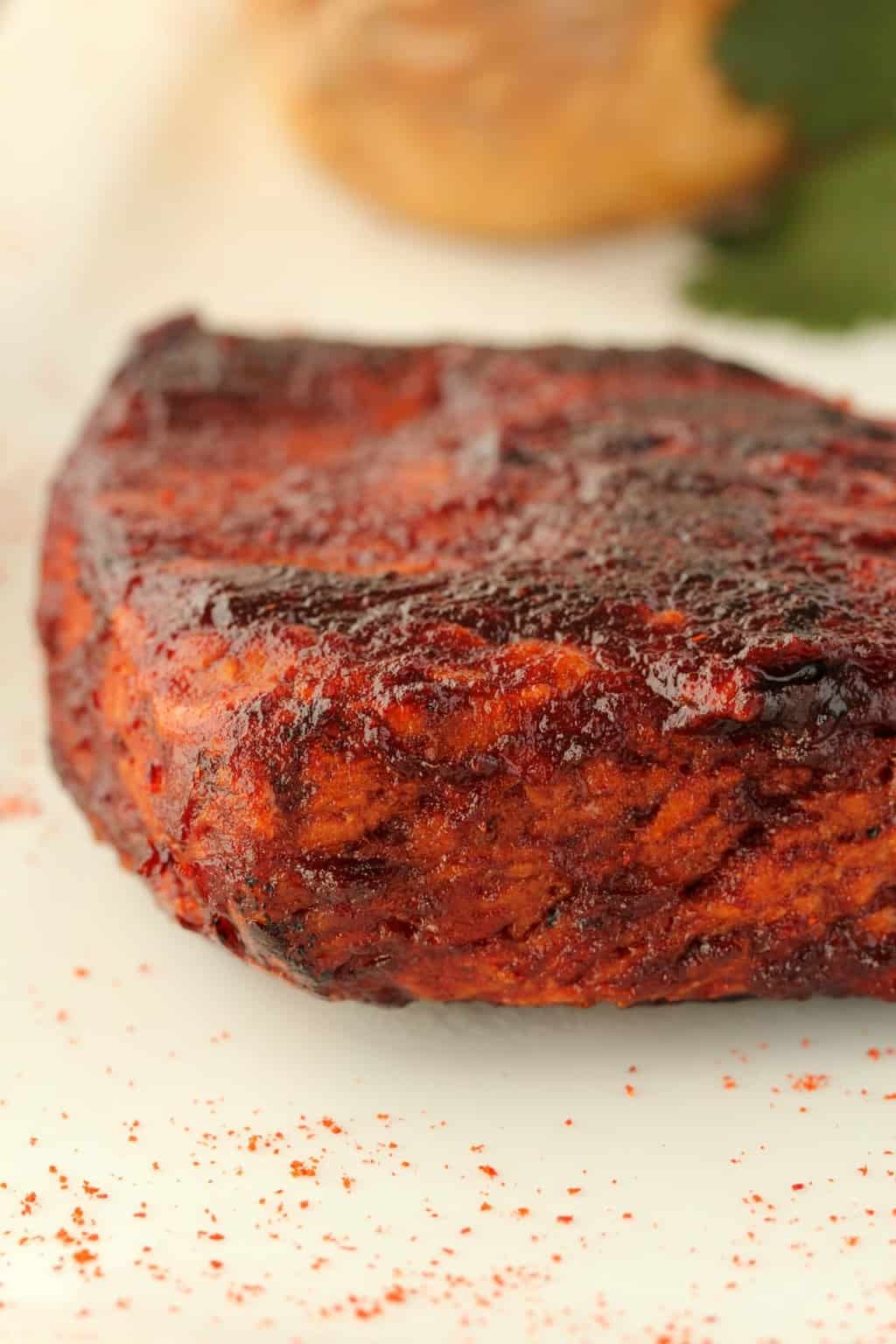 Oh my gosh, can you actually believe the look of this vegan steak? It looks like a steak doesn’t it!

The last 10 days or so we’ve been in full vegan steak testing mode and I’ve been sending off photos to my sisters as I make this (practically my whole family is vegetarian!) so that they can ooh and aaah in shock at how realistic it looks.

But here’s the thing: it doesn’t matter how realistic it looks, it’s NOT meat, it’s entirely vegan so there’s really no issue there.

I was inspired to make this recipe by a video that was made by the folks at Bosh featuring The Happy Pear and that I shared on my facebook page.

Well, a little debate immediately ensued whereby someone asked why a vegan would ever want to eat something that looked like a piece of meat. Well…. quite a few vegans had something to say about that because…well…it’s NOT meat. It’s just something tasty.

And when we can replicate some tastes and textures a little, without harming anyone, well why not? And then there’s the fact that the better we are at making tasty things, the more appealing veganism becomes to the mainstream so it’s a win/win.

Truth be told though, while this vegan steak is totally delicious, it wouldn’t fool any meat eater. I haven’t eaten meat since 1999 and yet I know full well that this doesn’t taste like meat. It’s ‘meaty’ while being nothing like actual meat.

It tastes absolutely delicious though! And it has a chewy, ‘meaty’ texture, which is from the main ingredient, which is wheat gluten, commonly known as seitan.

We lived in Taiwan for a year in 2007/2008 and we used to often eat at Buddhist restaurants because they were strict vegetarian, and sometimes the mock meats you’d eat there would be so realistic, you really would be worried that it might actually be meat and would have to call someone over to confirm that it was really vegetarian. They would often make it from mushrooms!

Getting hold of some wheat gluten wasn’t the easiest thing, and in the end I had to order it. You may have to order it too. I went to all the health food places that usually would sell ingredients like this and they were totally confused, they were like: ‘you WANT the gluten?’

And then we’d all have a laugh cos everything is gluten-free this and that and here we are coming in and asking them to give us the pure gluten!

If you do have to order it you can get it from Amazon, the full name is Vital Wheat Gluten. Or maybe you’ll have a larger selection in your health food store than we did and won’t have to order it.

It’s super high in protein, like super high, there are 75g of protein in 100g of wheat gluten.

But yeah, you’re definitely not gluten-free with this recipe and there are no adaptations for gluten-free, this is definitely one for the ‘yes I DO eat the gluten’ people!

Vital wheat gluten is really an essential component of this recipe and what creates the texture. If you are gluten-free, then you might like to try this gluten-free vegan steak from Gourmandelle.

How to make vegan steak (don’t knead it for too long!)

Making it is super easy, but there are several steps involved. First you add some chickpeas, spices, tomato paste and vegetable stock to your food processor and process it up.

You move that into a mixing bowl and then add the vital wheat gluten. Mix it in with a spoon and then get in there with your hands. You knead it like a pizza dough BUT here’s the thing, you don’t want to knead it for too long.

You have to be quite conservative with your kneading while at the same time kneading it just long enough to activate the gluten.

I found about 2 minutes to be just perfect, but it’s more about the feel than the time. It will go from sticky and soft to firm and when you stretch it, it will sort of snap back.

The reason you don’t want to knead it for too long is that the longer you knead, the tougher the texture will be.

On one of our recipe tests, Jaye took over the kneading and he thought it was supposed to be for 4 minutes, well lets just say our jaws got such a workout, we ended up cutting those vegan steaks into very thin strips (it was kinda like jerky!) and then putting it on sandwiches. It was still good, but not juicy and tender like you want a delicious vegan steak to be.

If you knead it for an even shorter time than we did here you get a texture that is so tender that it doesn’t really work for a vegan steak, but works well for different things like seitan strips if you want to use this for something else.

Once you finish kneading you flatten it out by smashing it a little (not too much, this also counts as kneading) and then cut it into 4 steaks. You can bash those a bit to flatten as well. A potato masher works well for smashing/bashing purposes.

Then wrap the steaks in tinfoil and steam them in a steamer basket over some boiling water (or in any kind of steamer that you have) for 20 minutes.

Then unwrap them and soak them in marinade sauce for a minute or two before you fry them up!

We tested frying them on one of those lined grill pans and while that does cause them to have those pretty grill lines, I found that it wasn’t worth it in terms of the extra time taken.

If you fry them in a regular frying pan, it is super quick! Brush extra marinade sauce on every time you flip them and within a few minutes, they are charred and caramelized and utterly delicious.

The spices used in these vegan steaks really complements the sort of ‘meaty’ flavoring, so we used soy sauce, cumin, paprika, a little liquid smoke and coriander powder, to name a few, and the marinade is soy sauce, paprika, brown sugar, tomato paste and liquid smoke.

The result is really vegan steak perfection! They are massively filling, we were serving up a plate with one of these and a few sides and I ate one of these and couldn’t eat any of the sides I was so full!

Through my experimenting (and our experience of the super tough steak from too much kneading), I found a great article about working with seitan and if you want to get some ideas it’s well worth checking out.

The best tip I got was about kneading for less time if you want a more tender result, but there are loads of other great tips about spices and flavorings too, so check that out if you want to read more about wheat meat, it’s called: How To Make Perfect Seitan.

So I hope you will love this vegan steak recipe, it is:

Leftovers keep very well in the fridge! We were making vegan steak sandwiches for the next couple of days after making these because like I said, they are super filling, but leftovers are not an issue since they are delicious the next day.

If you want to make them in advance, you can make them up to the point that they’ve just finished steaming, then unwrap them and store them in a sealed container in the fridge for 3-4 days and then marinade and fry them up when you’re ready.

Alternatively, you can place them in the marinade sauce, and then let them marinade for 1-2 days in the fridge and then fry them up when you’re ready.

I couldn’t resist making a little sauce for this, it’s totally not necessary, they have all the flavor and deliciousness that is required, but c’mon with some mushroom sauce? That’s next level! So the mushroom sauce I made was from our tofu burger recipe. So if you’re inspired to make some sauce as well, I can highly recommend it. It’s a perfect match.

We adapted this recipe to make some soft and delicious seitan strips and then put those into a vegan shawarma, so if you’re looking for different ways to use this steak recipe then you’ll love that option.

And if you’re thinking of what to serve with your vegan steak, well, some vegan mashed potatoes would be great, and if you want a vegan gravy with it, that would be amazing too. Or would you rather have some baked potato fries on the side or a vegan potato salad?

So let us know what you think of these vegan steaks! Share your thoughts in the comments and please rate the recipe too! Thanks so much!

Sign up to our email list while you’re here, you’ll get a fabulous (and free) dinner recipes ebook with 10 great recipes and you’ll stay updated with all our latest recipes posted to the blog.

For the Vegan Steaks:

*I really recommend you weigh out the wheat gluten for accuracy. I couldn’t find a ‘standard’ measure for a cup of wheat gluten, so just weighed it out and this is what I came to. But for accuracy, it would be best to weigh it.

*These steaks keep very well in the fridge so leftovers can be sliced up and used for vegan steak sandwiches the next day!

*Nutritional information is for 1 vegan steak (of 4) without mushroom sauce.

*Recipe adapted from Bosh with The Happy Pear.

Did you make this recipe?