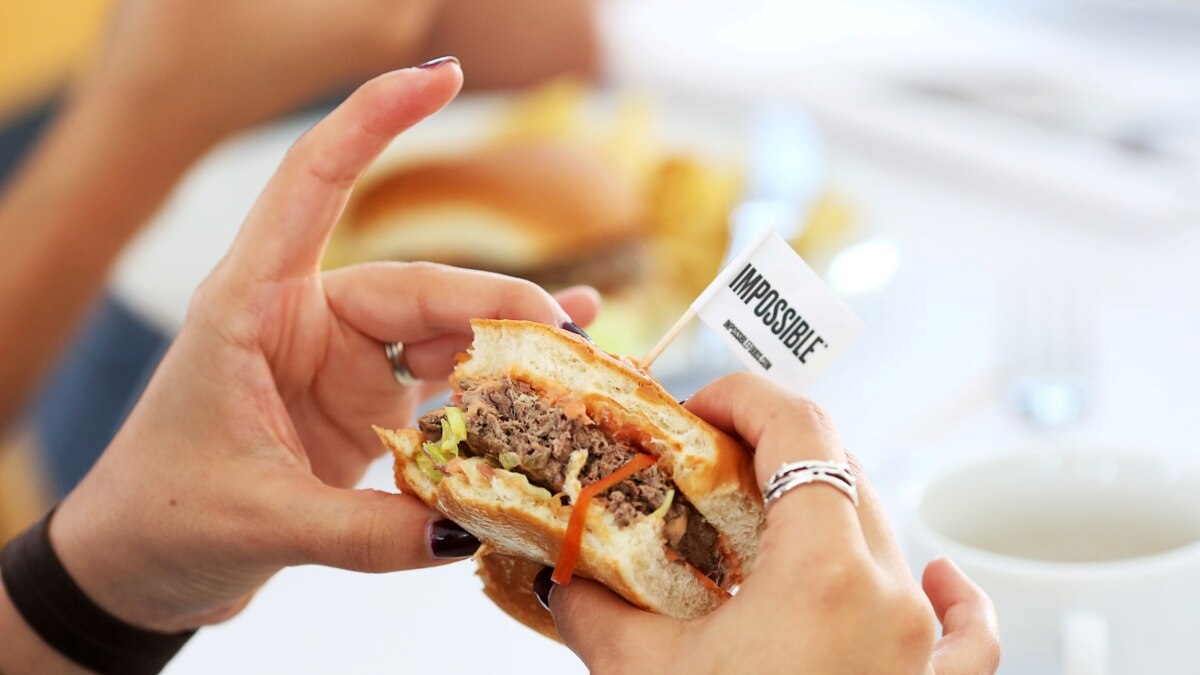 Are we seeing China catching up on fake meat?

Some new companies that focus on plant protein are starting to do business in Hong Kong. They aim to enter the mainland’s successful multi-billion-dollar food market.

Impossible Foods, JUST and Beyond Meat say their products are more sustainable and environmentally friendly than animal meat.

Plant proteins are fake meat products made from vegetables and grains. They include eggless eggs, pea-stuffed burgers and cell-grown fish products.

The research firm Market and Markets says the value of the global meat substitutes market was around $4.6 billion last year and is predicted to reach $6.4 billion by 2023. Asia is the fastest growing part of that market.

Peter Thiel is one of those giving money to San Francisco-based JUST. The company has a value of $1 billion and is planning to start selling its mung bean fake egg product in six Chinese cities starting next month.

The company says its use of the mung bean, a typical Chinese food, helps Chinese customers feel more comfortable with the foods made with it. They trust that it is safe.

China has a history of food safety issues. The problems have included eggs with plastic powder, very old frozen meat and crops ruined with heavy metals.

Nick Cooney is a partner of Lever VC, a U.S.-Asian investor focused on the new food companies. He said Chinese customers will try new, different foods more easily than people in other countries.

Another competitor, Impossible Foods, says its soy burgers will remove the need to use animals for food and make the global food system sustainable.

The group has received around $450 million in funding since 2011. Investments have come from Lee Ka-shing’s Horizons Ventures and Google Ventures.

Hong Kong-based Avant Meats uses cell technology to replace fish and seafood products. This process uses the stem cells from an animal to grow meat in a laboratory. Avant Meats is developing a cell-based fish parts sample to be introduced later this year, its chief executive Carrie Chan told Reuters. The fish parts are popular in Asian soups and stews.

Right Treat, another Hong Kong company headed by David Yeung, is seeking to replace Asia’s favorite meat – pork. The new product, called “Omnipork,” combines mushrooms, peas and rice for people to use in dumplings and meatballs.

Since Omnipork was first sold in Hong Kong in April 2018, sales have tripled – in other words, increased by three times.

Supporters of plant-based protein say meat substitutes are healthier for people. They also use less water, produce fewer greenhouse gases and use less land than producing the same amount of meat.

Consumers, however, must be willing to pay a little more. Both Omnipork and Impossible Burger are more expensive than the meats they replace.

Farah Master reported on this story for the Reuters news agency. Dr. Jill Robbins adapted it for Learning English. Kelly Jean Kelly was the editor.

Would you eat plant-based meat? How about meat that grows in a laboratory? We want to hear from you. Write…