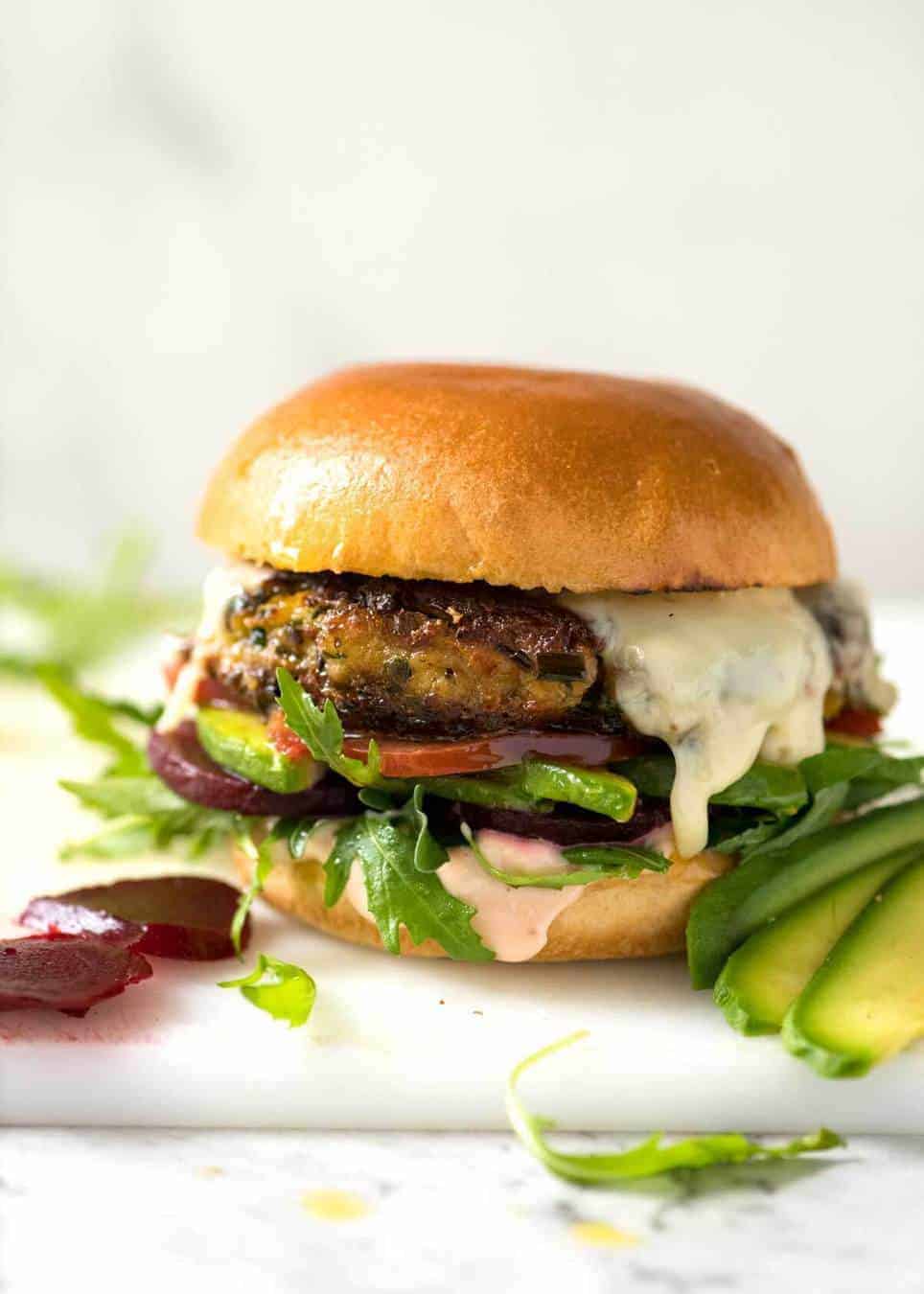 This is a Veggie Burger recipe created by a carnivore, for carnivores. It is not a vegetarian burger pretending to be a meat burger, packed with obscure ingredients. This is just a flavour packed, juicy veggie patties that’s satisfyingly meaty with great texture!

A vegetarian burger will never taste like a beef burger. So forget trying to fake meat. Just make a tasty, meat free burger!

My idea of a perfect Veggie Burger is one that has less beans* and more veggies, a golden crust on the outside, moist on the inside but not soggy ( <– notorious problem with veggie burgers), with a nice meaty texture.

It only contains “normal” ingredients and most importantly, it has to be ultra tasty. I’m not willing to compromise on deliciousness just because this is meat free. It has to be just as tasty in its own right!!!

The BEST veggie burger gets a flavour boost from mushrooms and parmesan. It has a meaty texture and a golden crust!

* Most Veggie Burgers are quite high in beans, presumably because it’s the easy solution. But beans tend to have a dense mushy texture, rather than a meaty texture, and they make the flavour of the veggie pattie excessively “beany” which is not what I wanted.

The secret to a killer veggie burger Veggie Burger….

Bake the beans and vegetables to dry them out slightly. This serves three purposes:

For the vegetables, I use mushrooms and carrots.

As for the beans, I use cannellini beans mainly for colour purposes. Other beans will work just fine – I’ve made this with red kidney beans, black beans, butter beans and chickpeas.

When you pull them out of the oven, they will look thoroughly unappetising. Wrinkled and dry. And that’s exactly what you want!!!

↑↑↑ Always amazes me how much mushrooms shrink.

Veggie burgers are healthier than beef burgers because they’re loaded with more nutrition and have far less fat.

I think you’ve already got the gist that texture is key with Veggie Burgers. Biting into a glorious towering burger only to find the patty is so soft it oozes out the sides and has the texture of baby food is truly one of the saddest food experiences you’ll ever have.

So here’s my (other) rule for a killer Veggie Burger – a 4 Stage Blitz. It’s key to control texture.

The cashews. Trust me, you need them. They add soft bits of texture into the Veggie Burger Mixture. Can’t separately identify it in the end result, but when you bite into it, you’ll notice if they’re absent. Blitz these first until they are chunky breadcrumbs.

Add the wrinkly dried out beans, carrots and mushrooms. Blitz again until they are crumbs. Don’t blitz into powder otherwise you lose texture – and remember, there’s still 2 blitzes to go!

Add the Flavourings. Parmesan, garlic, paprika, mayo (bit of fat + flavour), salt and pepper, plus egg to bind and some breadcrumbs to reduce some of the moisture content of the Veggie Burger mixture. Blitz again until it’s all well combined and it has a texture like meat mince (ground beef).

There’s room to move on the amount of blitzing in this step, as long as you can still see “bits” in the mixture. In the burger photo at the top of the post, I blitzed the mixture more than pictured in the step photo below so the side of the burger looks smoother.

Add brown rice and shallots / green onions, then blitz very quickly just to disperse. Don’t over blitz – if the rice gets mushed up, it turns gummy and gluey.

The shallots add freshness – you could sub this with chives or parsley, but don’t sub with onion or leek (they’re too watery).

The mixture should be wet enough so it holds together when you make patties, but it shouldn’t get stuck on your hands. If the mixture is too wet, add a touch of extra breadcrumbs and blitz quickly to disperse.

I know, I know, you want gigantic, super thick Veggie Burgers. I’ve been there, and discovered the hard way that you can’t be greedy when it comes to Veggie Burgers.

Anything thicker than 2cm / 0.8″, and you’ll started experiencing soggy insides.

Any thinner than 1.3 cm, and it starts becoming more like crisp fritters.

With beef burgers, it’s all about cooking hard and fast, and ensuring the inside isn’t overcooked. With Veggie burgers, it’s the opposite – ensuring the heat is low enough so it cooks all the way through without burning the outside.

Also – no skimping on oil! You need it, to ensure you get a nice golden crust on the burgers. Veggie Burgers have very little fat compared to beef burgers. So you need it!

And here it is! Hopefully you can see from the photo that the inside looks firm but still moist, with plenty of texture. It’s by no means crunchy at all, all those “bits” you see give the patty meatiness so you feel like you’re biting into something substantial rather that something soft and wimpy.

Is it worth it?

YES. No question about it.

It is actually really hard to buy a good veggie burger, at least here in my area. The ones at the supermarket are just offensive. And every time I’ve taken the plunge and chosen a veggie over a meat burger when I’m eating out, I’ve always been disappointed.

And it was one such disappointing experience that kicked me into action to make a killer homemade Veggie Burger.

It’s everything a burger should be – it’s satisfying, it’s juicy, it’s “meaty” and most importantly of all, it’s so darn tasty! – Nagi x

More really great recipes that just happen to be Vegetarian

WATCH HOW TO MAKE IT

Tap or hover to scale

Recipe video above. A Veggie Burger created by a carnivore, for carnivores. It is not a vegetarian burger pretending to be a meat burger, packed with obscure ingredients. This is just a flavour packed, juicy vegetarian burger that’s satisfyingly meaty! Chilling time: 1 hour

1. Other beans work great with this recipe. I’ve tried red kidney beans, black beans, butter beans and chickpeas. The bean you choose will affect the colour and you may need to adjust the bake time – look for the same wrinkly dry, splitting skin. The chickpeas give it a slight Falafel-type flavour.2. Roasted unsalted cashews are also ok. Other nut subs – the best is macadamia nuts, similar in texture to cashews. Almonds and walnuts are also great. For people with nut allergies, sunflower seeds is the best option I can think on.3. Normal breadcrumbs will also work here. For a Gluten Free option, use crushed rice crackers.4. Any other cooked rice can also be used, or other rice-like grains like quinoa, bulgur and buckwheat.5. Don’t let the carrots and beans get too golden because this will dry them out too much and you’ll get crunchy bits in the burgers. Just a tiny tinge of golden is ok, but the main thing is to look for is dried splitting skin on the beans. See photos and video.6. Chunkiness of mixture: There’s flex here – you can make it smoother (see first photo in post where the side of the burger has less visible chunks in it) or leave it chunky (video and remaining photos in post). In fact, most of the photos in the post are from different batches and you can see some are far chunkier than others. They are all great, and work fine so don’t stress here.Just blitz enough so the mixture holds together easily when you form the patties, but don’t blitz so it becomes a uniform single colour.7. Don’t make the burgers much thicker than 1.8cm / 0.7″ thick otherwise the inside ends up too soft. You need the right ration of golden crust to meat insides!8. Cheese option: Top the patties with cheese as soon as you flip, then cover loosely with a sheet of foil or lid until the cheese melts. Swiss cheese is especially delish (pictured in post)9. Burger Sauces: Use your favourite, whether it be ketchup, mustard, relish, BBQ sauce or chutney. For a quick homemade one, the pink sauce pictured in the video is my Pink Burger Sauce, made as follows: Mix sour cream or yoghurt or mayo with finely chopped dill pickles and a dash of sriracha or other hot sauce, plus salt and pepper to taste.10. STORAGE: Refrigerate raw up to 24 hours, cook cold straight from fridge. For freezing or storing longer in the fridge, cook the patties, cool then refrigerate or freeze. To reheat, thaw fully (in fridge or out on counter, don’t microwave) then reheat in the pan or bake at 180C/350F for 10 minutes until crisp (don’t microwave, it steams = soggy).Reason: I found that storing raw burgers for longer than 24 hours made them a bit more moist than ideal on the inside, presumably because of the salt making the veggies sweat. This problem was most extreme with the frozen raw burgers.  48 hours in the fridge was marginally not as good as freshly made to 24 hours in the fridge (but I was being very fussy!). However, storing and reheating cooked burgers was absolutely fine, no loss of quality (both fridge and freezer).11. I learned the technique of baking the veggies and beans from thisUltimate Veggie Burgerfrom New York Times and have since seen it used by other cooking authorities including Serious Eats and Cooks Illustrated.12. Nutrition per serving, veggie burger patty only because I cannot be held responsible for how much you cram into your burger! 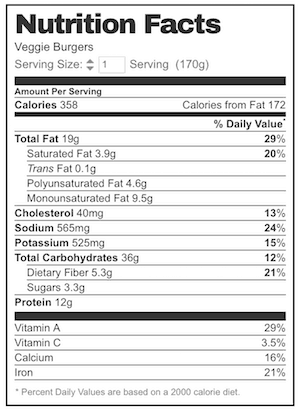 Did you make this recipe?I love hearing how you went with my recipes! Tag me on Instagram at@RecipeTinEats.

At a weekend gathering. His eyes are just at eye level. What torture for him!